NORFOLK – High school students were given the names “Legion of Doom” and “Anonymous,” among others, as they checked in for a special program through Northeast Community College’s information technology (IT) department. The sixty-four students from fourteen area high schools took part in the College’s first “Cyber Security and Software Development Summit” in the program’s Echtenkamp building here Wednesday.

Brad Vogt, IT instructor, said the day had two purposes – to show students who are interested in a career in information technology what Northeast has to offer, and to explain that there is a big push to get more people into IT as it is a growing field.

“Students had the opportunity to rotate through four, 50 minute sessions where they received hands-on experience in coding, web page development, securing a database, and reconnaissance.”

Vogt was joined by the College’s other IT instructors, Richard Chrisman, Kris Coan and Gigi Simonsen and several IT students.

Vogt’s session on reconnaissance allowed students to hack into a closed network in his lab.

“They were able to learn some security terms – ‘security through obscurity.’ They also learned a little bit about how networks work and how data gets from one computer to another through routers.”

Cybercrime occurs approximately one-thousand times per second and they include a number of different types of attacks. Vogt said it is necessary to discuss the issue since hacking has become more of a problem around the world. He said it is sponsored by state governments as well as organized crime and individual hackers.

“There’s a wide array of attacks that are happening constantly to anybody who is on the internet, which is pretty much anybody. We’re relying increasingly on imbedded devices, from baby monitors to your cars to smart homes,” he said. “Any time you see the word ‘smart,’ essentially there is a computer there that is typically connected to the internet and they are connected with default passwords, so hackers are just exploring that.”

The summit was also part of the College’s initiative to apply to become a center of academic excellence.

Northeast Community College is in the process of applying for CAE2Y (Center of Academic Excellence –
2 Year institution) designation through the National Cyber Watch Center – a program that is supported by the National Science Foundation (NSF). The program utilizes institutions of higher learning across the United States to assist in improving national cybersecurity.

“One of the greatest threats to our country is cybercrime and having an educated and prepared workforce is essential in our increasingly connected world,” Vogt said.

Vogt said it is good that students learn these topics at anearly age.

“We want them to know there are many opportunities because many people really don’t understand just how many prospects there really are in the field of information technology. There is still a misconception that all of these jobs are overseas when there are so many jobs that just can’t go overseas. They can’t be done by people outside of our area.”

Vogt said Northeast has several graduates who work in the IT field, from programming to performing security.

Also as part of the summit, the names of four of high school seniors who attended were randomly selected to each receive $1,000 scholarships to Northeast. They are Dylan Doering, Norfolk, Luis Garcia, Madison, and Dylan Davis and Andrew Wiese, Oakland. All four plan to attend Northeast next year. 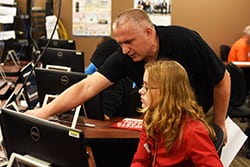